The Space Between Nothing And Desire 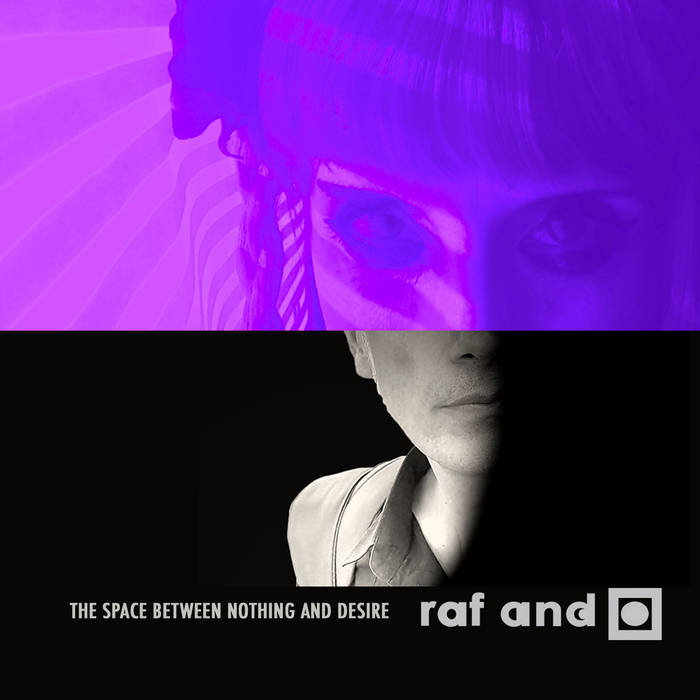 "Raf Mantelli and Richard "O" Smith are growing in stature with every release. 'The Space Between Nothing And Desire' their fourth album, contains some of their most minimal work to date- at time just a voice, a piano, a gentle dusting of electronics and, er, that's it - but the intensity is off the scale. It begins with 'A Bow To Bowie' an enthralling tribute to one of Raf and O's main inspirations, and later on they deliver a typically idiosyncratic version of 'The London Boys', the early Bowie B-side. Elsewhere there's a futuristic cabaret feel to 'With Fatzer' and a music hall kookiness to 'A Mechanical Ride', while the charming 'Underwater Blue' will go down in pop history as the track that launched the snorkelectro scene. Nothing in this album is obvious - this pair don't do straight - but give it a couple of listens and you'll be amply rewarded.
From the poignant to the provocative to the playful, 'The Space Between Nothing And Desire' is wonderfully theatrical and, unless you're made of stone, quite irresistible." Push, ELECTRONIC SOUND

“Stark and otherworldly, a haunting ode, subtle swelling bricolage of ghostly synths, tumbling acoustic notes and a bass drum that thuds like a heartbeat throughout. While Raf’s almost otherworldly almost jazz-like vocals spiral across the upper register with echoes of Kate Bush at her most avant-garde” GOD IS IN THE TV ZINE

“This is a strange and luscious album”
JOE MUGGS

"A defiantly original act, one which one can listen to time over and still find something new, and with 'The Space Between Nothing and Desire' they have created an album that is as daring as it is compelling” PENNYBLACKMUSIC

"Imbued by both the musicality and spirit of David Bowie, Scott Walker, David Sylvian (both as a solo artist and with the fey romantics Japan), Kate Bush and in their most avant-garde mode, Bjork, the South London based duo of Raf (Raf Mantelli) and O (Richard Smith) occupy the perimeters of alternative art-rock and experimental electronica as the true inheritors of those cerebral inspirations.
Previous albums by the unique duo have featured the most spellbinding, frayed accentuate of Bowie covers, with even Aladdin Sane’s oft pianist Mike Garson extolling their strung out exploration of ‘Lady Grinning Soul’, and a version of the Philly Soul period ‘Win’, quite exceptional in its purring beauty, that ranks amongst the best covers I’ve ever heard. Paying further tribune to, easily, the duo’s most revered musical deity, they lay a diaphanous ethereal accompanied wreath at the metaphorical graveside on the latest, and fourth, album opener ‘A Bow To Bowie’. With all the duo’s hymnal and venerable qualities in full bloom, Raf’s dream-realism coos and fluctuating accented velvety tones ripple through the Bowie cosmos; sending thanks across a strange space-y soundscape of satellite bleeps, mirror reversals and twilight vortex. Raf’s extraordinary vocals are on the surface vulnerable and stark yet beneath lies a steely intensity that often whips, lashes and jolts, part of a diverse vocal range that always manages to sound delicate but otherworldly, like an alien pirouette doll full of colourful giddy exuberance, yet a darker distress and tragedy lurks in the shadows.
Sublime in execution, subtle but with a real depth and levity, TSBNAD is an astonishing piece of new romantic, avant-theater pop and electronica that dares to unlock the mind and fathom emotion, a masterclass of pulchritude magnificence. They deserve far more exposure and acclaim, and so here’s hoping that TSBNAD finally gains this brilliant duo their true worth." Dominic Valvona, MONOLITH COCKTAIL
Full Review on The Monolith Cocktail.

"This latest album, if anything more perfectly realised and brilliantly entrancing than their previous work, seems more about a sonic journey than a meeting point. It takes the listener on an audio voyage that seems to bridge the gap between cosmos and earth as the record develops.'A Bow to Bowie' gazes explicitly heavenward, combining respectful, open sincerity with sheer intelligence and wit, absorbing musical and lyrical references to the song's subject into a structure all their own. The title track is almost a battery-operated torch song, Raf's sensual, almost swinging vocal conjuring up a kind of electronic chanson. With its shimmering synths, echoing chimes and vibes, and submarine pulses, 'Underwater Blue' is perhaps the closest the duo have come to a 'hauntology' track - theme music, but when the broadcaster's library is on another planet. It actually feels like the aural equivalent of diving/drifting" ADRIAN SPECS
Full Review on Adrian Specs Blog

Raf and O AKA Raf Mantelli and O Richard Smith return with their fourth album ‘The Space Between Nothing And Desire’ (TSBNAD) on Telephone Records. Having marked out their unique and widely acclaimed song and sound world over the last decade, the South East London duo have released three widely acclaimed full length albums to date (A Giant In The Snow 2010, Time Machine 2014, Portal 2016). Hailed by The Quietus, FACT (Time Machine was Top 10 albums of 2014 picked by Joe Muggs on FACT) and Electronic Sound amongst many others, for their unique detailed avant-pop, amongst their explorations they have set music to Shakespeare, composed music for theatre and with special collaborations under their belt, they’ve played venues such as The Queen Elizabeth Hall and The Union Chapel. Recently establishing a side project ‘The Kick Inside’, an interpretative acoustic celebration of Kate Bush’s early albums performed entirely on vocals, piano and double bass, Raf and O were also praised by Mike Garson, David Bowie’s pianist/ long-term collaborator for their unique interpretation of Bowie’s Lady Grinning Soul. “The excellent Time Machine represents the very antithesis of EDM - There is a butterfly, acoustic delicacy and yet also the deceptive, steel strength of spider silk in their complex weaving - Raf’s vocal ranges far and wide in her emotional and lyrical foragings” – David Stubbs, The Quietus “Raf and O specialise in floaty and delicate musical paintings - beautiful stuff.” – Push, Electronic Sound “Superbohemian, super kooky - the sort of record that makes it feel like John Peel is still alive” – Joe Muggs, FACT Magazine
With ‘The Space Between Nothing And Desire’ the duo go in search of a new quest: where, or, what is the space between nothing and desire? The primal concept that makes the world go round, desire, is abstract and yet so tangible, juxtaposed to nothing, equally as baffling, as to truly imagine it, it is impossible. With these parameters forming their chart, the latest album captures the duo navigating a journey into the senses, into the longing and the belonging, featuring Raf’s distinctive and beautiful vocals delivering haunting and soaring melodies throughout. From the off kilter avant popness and detailed imagery of the album title track, to the post dub sensibilities of ‘Anger’, from the otherworldly sensuality tinged in 50s futuristic sound of ‘Underwater Blue’ to the epic psychological journey of ‘Your Gazing Stare’ and to the warped carousel and down right catchiness of ‘A Mechanical Ride’.
The leading track from Raf and O’s new album is ‘A Bow To Bowie’. Here the duo pay respect to David Bowie with a beautiful, minimal and heartfelt song, an acoustic guitar, synths and vocals swelling and soaring, while a constant bass drum like a heartbeat underpins the track. Over the years Raf and O have expressed their affinity with Bowie and took on the task to reinterpret some of his songs. ‘A Bow To Bowie’ was written in December 2016, Raf says: “I really wanted to write a song for David after his passing, but it took me a few months before I felt I could tackle it”. The album is available to pre-order from 29th March. ‘A Bow to Bowie’ and another new song ‘A Mechanical Ride’ will be available immediately upon pre-order of the album.
The album also presents a haunting reinterpretation of a Scott Walker composition from his first album, ‘Such A Small Love’ which was first heard on the Scott Walker compilation for God Is In The TV Zine. Alongside Raf and O's more familiar electro acoustic world featuring vocals, electronics, synths, drums and acoustic guitar, the pair introduce two tracks performed solely on acoustic piano, vocals (Raf) and guitar (O). Whilst in this "swapped role" mode, as generally O is on synths/ drums and Raf on guitar, they explore an acoustic minimalism, creating a spectacularly enchanting world in ‘Haunted’, an original composition and ‘The London Boys’, a David Bowie reinterpretation of a more obscure track from the mid 60s, both tracks presenting another facet to their sound that effortlessly snake around the rest of the more electronic tracks. The piano, this time alongside electronics, can be also heard on The Windmill and on ‘With Fatzer’ (previously released on the ‘Mitra Music For Nepal’ compilation alongside works from Ryuichi Sakamoto and Nick Cave). Inspired by Fatzer, an unfinished play by Bertold Brecht reworked for the stage by Mark Von Henning and set during WW1, Raf and O’s ‘With Fatzer’, beautifully depicts a desolate world with no apparent future, the characters seeking consolation in brief and intense sexual encounters.

All music, lyrics, conceived, written, recorded and produced by Raf and O except track 7, music and lyrics written by Scott Walker and track 10, music and lyrics written by David Bowie. Track 8, inspired by Brecht’s unfinished play Fatzer reworked for the stage by Marc Von Henning.
Mastered by Mark Beazley at Trace Recordings.
Artwork, images and photographs by Raf and O.